This game is interesting money-wise, especially when it comes to gear.  There are no repair costs, but literally everything costs money, and a lot of it.

Then even if you do come up with 30 mill, you need more than that to account for other increases, especially in the realm of weapons.  Shots and spiritshots cost more as your weapon gets better.  As any class but especially summoner, you can’t drop all your money on your armor because you need some at a minimum for shots and crystals to even summon your ‘weapon’ which is your pet.

I still want BW light because I get hit quite hard just once or twice if I can’t get my pet to pull aggro quick enough, but I’ll have to buy it at 30m but have 40 mill just in case for other things. 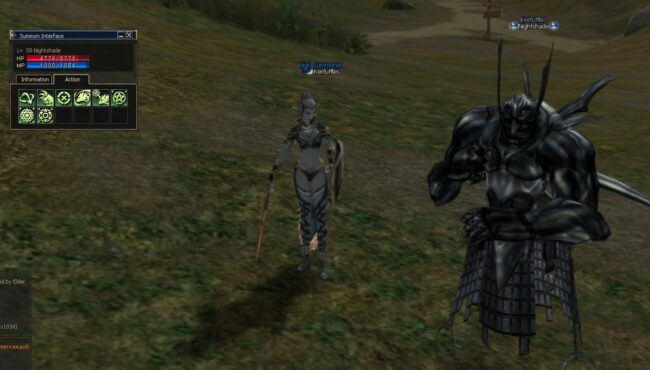 I learned Nightshade the other day, then decided to pull in Excel and document all my servitors stats, crystal usage, shot usage, skill, and downsides if any. The summary is as follows, at level 56 and all servitors levelled up:

Shadow: Slowest speed, passive (and undocumented) VR, highest crystal usage but otherwise Patk only about 88 lower than soulless. An absolute boss for 2-3x hp mobs, only really needs heals on 2 or more mobs at once, or mobs in the yellow/light red range.  Since he’s so slow, you can easily run along side him and melee if you so desire, which is what I do.  Takes 30% exp though but well worth it.

Soulless:  Fastest speed, highest patk, two skills (poison and corpse explosion, neither really worth doing imo), only takes 10% experience BUT has a MP draining debuff they place on the summoner that brings your mana regen to a standstill.  Should stick to 1x hp mobs that are white or lower, or you’ll be doing a lot of healing that will slowly drain you to nothing thanks to the debuff. May as well just stand around and let him attack though because he’s quicker and the mana drain is a bitch.

Nightshade: Second fastest, only takes 5% exp but has patk far lower than the rest.  Think like 500-600 less.  Has a taunt+curse combo that includes reducing pdef and mdef both single target and AOE version.  However has ZERO mitigation skills to go with those taunts and unbelievably his pdef is the SAME AS THE OTHER PETS. He has a big heal but it’s a 1 to 1 health transfer from the servitor to the selected target.  Could be used as an off-healer though if like, all the other healers were afk or oom or something. No idea why you’d have this guy out at all though. As of right now I have no clue what niche he fills.

Silhouette: Slow as Shadow for some reason, and takes a whopping 90% exp.  Only takes 1 D crystal to summon though.  Has the same patk as shadow and a Steal Blood attack to attack the enemy and heal the servitor. Likely just for pvp.

With all that being said, I will use Shadow for yellow mobs, 2-3x hp mobs, or when I need to be pretty safe.  He’s a fucking BOSS.

Soulless is quick and strong if you are in a safe scenario with 1xhp mobs that won’t gang up on you, white or green is perfect. Also takes considerably less exp.  You really need herb drops to keep his hp up because your mp won’t keep up otherwise.

The other 2 are not worth using as far as I can tell at the moment.

So! I’m about to hit 56 and things have been going pretty well.  I did finally get an invite to a clan but I’m honestly shocked it didn’t happen before it did.  I am glad I picked phantom summoner because I can easily solo white mobs even 2-3x hp mobs with Shadow and I barely even have to heal.  Beast shots are cheap and I can carry like 15k of them easily.  I don’t have to stop and rest basically ever, unless I’m resummoning and rebuffing but at no point do I have to sit down and wait.

As I understand it, on this server there are clearly classes that no one plays.  I guess no one bothers with any tank and bishop is considered the best healer but otherwise completely useless because he has no damage buffs of any kind.  How it was back in the day too I guess.  #noregrets though playing one for so long.

Anyway apparently a PS is the worst summoner because it doesn’t have features for a party.  Like a warlock has buffs that are good for melee, I think, and elemental summoner has good buffs for mages.  But PS has nothing.

Class balance in this game was always trash, though.

But since I basically do nothing but log in and solo, PS fits me just fine.  I made enough money to purchase a homu with acumen and I’m hoping to buy BW light at some point.  I melee with my shadow because that’s the play style I decided to take.  I don’t buy shots for myself though because earning money is hard enough as it is.

It’s enjoyable though, and my clan is fun just chatting.

So I started playing L2Reborn and in general I’m enjoying it.  No bots, no multiboxing, what appears to be a healthy server population.

But at level 38, I’m figuring out the community so far absolutely sucks.

I will say when I just started and made it to the DE village, someone gave me 1 million adena, then ran right off when I said I was new to the server but had played before.  No invite to an academy.

Made it to Gludin, made it to Gludio, got killed in RoA for no reason.  Someone started attacking me so I attacked back, then another person joined in and killed me.  Ok I was just grinding?

No one has given me buffs just in passing, but a SE did run up to me in EG and try to extort 15k for buffs.  Like no? I’m new, I have little money and you want to charge me? What kind of asshole are you?  Back in the day I use to buff people as I ran through areas just to be nice.

Then someone was recruiting even new players in shout, so I ask if I can join.  They ask me my level, I reply, then they never replied again. Uh cool?

The final straw that made me write this was…. other than no one buffing me, asking if I wanted to join a clan, etc (behavior that was common in retail L2 back in the day) was I got PK’d in the Execution Grounds for no reason.  I was 99% into level 38 when a necromancer with a cursed man PK’d me. Literally no one was in that zone or area for like 2 straight hours.  I called him an asshole, he said “why” and then logged out. The community blows.

The other day I was going down memory lame with an old L2 player when it came to light about all the private servers still running. I think I may go back and play!  Believe it or not, a grindy game is rather appealing right now.  For instance I like going into New World and just chopping trees for a long while.  It’s relaxing.  In WoW I use to fly around collecting ore and or herbs until my gathering bag was full and again, it was relaxing jumping from point to point.

That being said I was honestly considering what class I’d play again.  Like what has the most sustain?

Back in the day, the people that were farmer enforcers like “Jeffyee” were dagger class characters. They would equip the Cursed Main Gauche (if I remember that correctly) which I think either had a bleed effect or the skill the dark elf dagger class had the bleed.  Anyway they were good for PKing people who didn’t clear out of the farmers territory.

Then later one of the famous PKers on Kain was Scabies, and he was a light elven archer.  That was because they were the fastest (I believe), could hit at a distance and then f right off.

But dagger and archers cannot heal themselves.

Now spellsingers were brutal because they had an instant cast mass sleep cloud, super fast spells, and that aura flare which in the first few chronicles, would tear a person up.  But had no way to get mana back.

Human sorcs had the same problem as far as I remember.

But Spellhowlers, one of which I played back then named RedVex,  had what I remember as “body to mind” which meant they could trade health for mana, and CDL (corpse life drain) where they could regain life from corpses.  So really great self sustain.  They weren’t the quickest casters but for just grinding around, I think that might be my best solo best without having a dual box SE.  I lost my SE Silverveil when the accounts upgraded anyway. Sigh.