Playing a mage is interesting because people can get portals, food and water from you.  Peoples social skills really fail in asking and compensating for these things, let me tell you. Just recently I had…

A nelf ask for a portal to Darn and tipped nothing.  I basically gave them like 20s the cost of the rune.

A paladin who wanted water, so grouped with me to find me in the plaguelands.  He then ran up and looted the mob I had just killed, taking my loot, then paid me 50 whole silver for 2 stacks of level 55 water.  Really the loot thing pissed me off the most even though it was just silver and some cloth.  Very rude.

In bgs lately I just summon like 200 waters and say “open trade for water” then I give all healer  types 2 stacks.  But sometimes people throw up a trade if I’ve said nothing and just sit there.  I like to target them, turn towards them and do nothing.  I’m not a gumball machine, you can’t just tap me and expect water or food to fall out.  The best part is when I say “open trade for water” and have someone throw up a window and ask for food.  I’m not summoning FOOD I’m doing WATER.

But the funny thing is, when I offer it for free in bgs, more than half don’t even say thanks.  Clearly I do not expect a tip in bgs but at least say thanks. It takes time to summon a bag full of water, like 3 full mana bars which just don’t refill themselves instantly.

Oddly enough all in the same night of the paladin stealing my loot, another paladin found me, asked for 80 waters, and tipped 3g.  And said thanks!  That’s how you do it!

I was out in Western Plaguelands just grinding mobs.  It’s like the old L2 days trying to level or get a drop, only with WoW, you will eventually get a drop.  So far I’ve gotten some nice items like a Blue Sapphire which got me around 25g and a Unicorn ring which was another 15 I think.  Not bad.

That being said it’s funny to find into people just completely utterly clueless and rude.  I was fighting some Scarlet Crusade groups when a hunter comes up to me and asks a question.  I’m like mid-fight.

You can see I immediately answered him but before I even finish looting the mob he says “good talk” and BLOCKS me.  Like really? You interrupt me killing something and expect an immediate reply and when you don’t, you block the person? GG.  And of course it was a HUNTER.

Overwatch has been boring for a while.  I realize they introduced more modes, maps, and even god damn new heroes, but honestly there wasn’t a point of playing.  There’s no PROGRESSION.  And the PVE events that I liked very much, are ONLY like twice a year!

I’m from an RPG background.  You level up, get better armor, collect cool items, get money.  Money in Overwatch means nothing, you buy skins and other things that have no effect on the game play.  Levels mean nothing.  Winning means nothing.  Now playing games just as an activity is fine, like in Simcity you don’t “win” anything but it’s fun to build different cities or plan on different end goals like getting a space port or perfect traffic.  There’s none of that with Overwatch.

Last night really did it in for me though.  Literally every game ha a Bastion and he’s so ridiculously OP your entire team has to focus on getting rid of them.  He can kill even a tank in about 1 second, even through a Zarya shield!  He can outheal Dva throwing rockets in his face and shooting at him like it’s nothing. If 1 class makes 6 other people have to focus them just to kill them, it’s insane.  But like I said, literally every game had a Bastion, or a Bastion behind a shield, or 2 shields, or 3 shields.  Or we’d be winning just fine and Desperation bastion came out and tipped the scales to a loss. I could be Zarya with a fully charged laser, pop bubble and try to kill Bastion and I COULDN’T.

That was bad enough but then the newest hero, Echo, is also stupid.  She can stay in the air what feels like forever and has three attacks that don’t appear to be on a GCD and she can just use one after another after another with no delay, no recharge, nothing. Then she can duplicate any hero and have their ult up in seconds. I was playing Dva on that movie set map and we were having a hell of a time with both Bastion and Torb, if I remember right.  I landed a mech bomb perfectly and killed 4 people.  We took the point and trucked along.

However fucking Echo kept picking Bastion for her ult and got 3 kills every fucking time she turned into him.  Over and over and over.  I can’t remember if we won or lost, but when she got PotG instead of my 4 kill, I quite literally quit and uninstalled the game.

Ranking in classic is weird.  I was at about 95% last week and around 150k honor had taken me about half an entire bar.  I figured I would be safe with 50k honor for the last 5%.

I went DOWN even more! I had to get honorspy just to track it properly.  So this is the 4th week I’m trying to hit 12 but I am not sure it’s possible with the way classic works.  That’s unfortunate.

In other news I won  TWO AVS IN A ROW last night! I could not believe it.  One I phased into in-progress and went on to win even! I spent time on defense and we even wiped Horde trying to kill Van.  They literally got wiped with Van at around 10%!  Just wow. We then took back Aid Station, pushing them back to Stormpike, then took that back too, pushing then all the way back to SHGY.  I bet they were SO MAD. 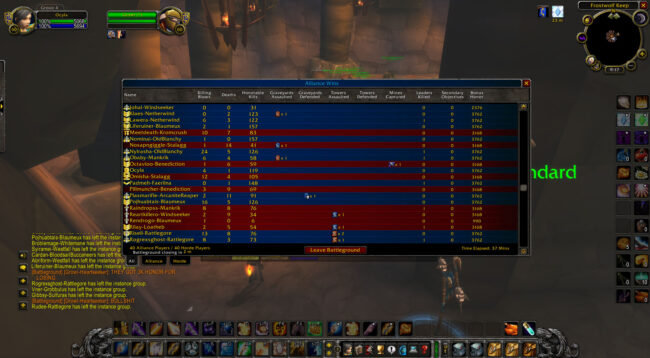